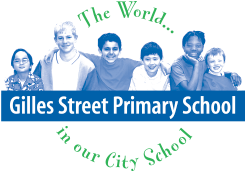 On Monday, 14th May 1900, Gilles Street Public School opened to serve the local community in the south-east corner of Adelaide. It was named after Osmond Gilles, an early treasurer of the colony of South Australia. When the inspectors visited in July there were 588 students enrolled, this in a school designed for 500. Overcrowding continued to be a problem, so a new infant building was opened in 1919 followed by an extra primary school building in 1926. In 1918 the Glover Playground in the South Parklands was opened and was used by the school for 'open air exercises'.

From 1920 until 1961, there were two separate schools - the Gilles Street Practising School and the Gilles Street Infant Practising School. Both had an important role in teacher training as practising schools for student- teachers. This period also marked the start of other organisations using the buildings, such as the Correspondence School, Girls' Special Classes, the Deaf Blind Unit, the Language Centre and the Curriculum Unit.